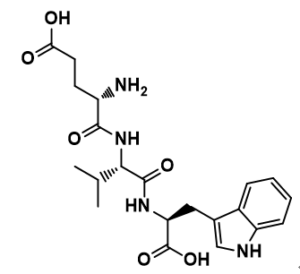 Description: Parkinson’s disease (PD) is the second most common neurodegenerative disorder; however, there is no treatment able to prevent the loss of dopaminergic neurons or its consequences. Trophic factors such as NGF and BDNF has positive effects on different disorders of the brain, including neurodegeneration. Additionally, studies have suggested the use of venom peptides as a therapeutic strategy for neurological disorders. Therefore, in the present study, we investigated the neuroprotective activity of a peptide isolated from Bothrops atrox venom and its trophic ability by using a cellular model of dopaminergic neurotoxicity induced by 1-methyl-4-phenylpyridinium (MPP(+)) in PC12 cells. We showed that it decreased the activities of the apoptotic proteases caspase-9 (mitochondrial) and caspase-3 (executor) and increased cell viability and proliferation in this model. Additionally, it increased neuritogenesis in non-treated PC12 cells (neuronal model) as well as in PC12 cells treated with the dopaminergic neurotoxin. The amino acid sequence of the peptide was identified as Glutamic acid-Valine-Tryptophan (Glu-Val-Trp). These findings suggest that this tripeptide has the potential to protect against the dopaminergic neurons loss and that trophic stimulation of neuroplasticity might be involved in its mechanism of neuroprotection.