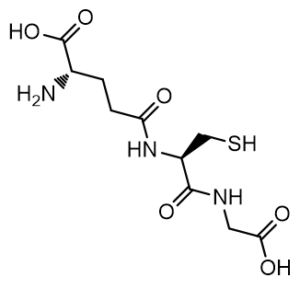 Description: Glutathione (GSH) is a ubiquitous, non-protein biothiol in cells. It plays a variety of roles in detoxification, redox regulation and cellular signaling. Many processes that can be regulated through GSH are critical to developing systems and include cellular proliferation, differentiation and apoptosis. GSH plays an important role as antioxidant and neuromodulator in the central nervous system. And GSH itself or combined with other enzymes can perform cleavage ability of intracellular free radicals, such as superoxide radicals, hydroxyl radicals and peroxynitrites. At the same time, GSH protects against glutamate excitotoxicity as a neuromodulator. As is synthesized in neurons and astrocytes, GSH plays its antioxidative and antiapoptotic ability mostly inside the cells. GSH had a characteristic kokumi flavor, such as continuity, mouthfulness, and thickness in the umami solution as well as in a model beef extract constructed from analyzed components at a concentration of 0.02% w/v. Some foodstuffs, including meat, were found to contain GSH above its threshold value, which implicates the contribution of GSH to the flavor.